Happy Wednesday Fabbies! Ya girl has been busy! Whew! Like for real. I am actually working on a few blog posts at a time (and also planning a Non-Profit event in Memphis, but more on that later), including the one I do at the end of each year, which is my “Favorite Looks Of The Year” post. As I was working on that post, which basically shows all of my favorite outfits and hairstyles of the whole year, I was looking at my pictures from my trip down to New Orleans for Brittanii’s Bachelorette weekend, and started thinking about the food there! THEN I was watching one of my favorite YouTube Vloggers, Earth Mama Medicine, and she made some soup that looked bomb! So couple seeing the soup with seeing the New Orleans pictures,  I got the bright idea to try and make my own vegan version of some gumbo!! So I did.

I browsed the internet searching for authentic New Orleans-style seafood gumbo recipes, and found TONS. Of course I don’t eat seafood, but I knew I could just omit the ingredients that I don’t eat, plus remix the recipes as I always do whenever I’m trying out a new recipe. After seeing so many, I came across a gumbo recipe from www.pinchofyum.com that looked and sounded tasty! Well, minus the meat haha. So after seeing that recipe, I used the similar idea as she did, but changed the method and omitted the ingredients I don’t eat, and added LOTS of veggies to my own version. Authentic New Orleans-style gumbo is popular for its pungent, flavorful taste, spice, and the roux. (Roux is basically flour mixed with butter to help thicken up a soup, sauce, gumbo, etc.) And being from the South, I’ve had my fair share of some bomb ass gumbo before going vegan, so I know the taste I was going for. In all, it came out AMAZINGLY well for my first time making it, and I could have sworn just for a hot second we were in New Orleans! Ha! And my family definitely approved, and went back for second and thirds. Thankfully I made a huge pot of it, so leftovers will definitely be what’s for dinner tomorrow!

Now lets get into the recipe!

You will need 2 different large pots to cook with: one for the veggies/sausage/broth, and one for the roux: 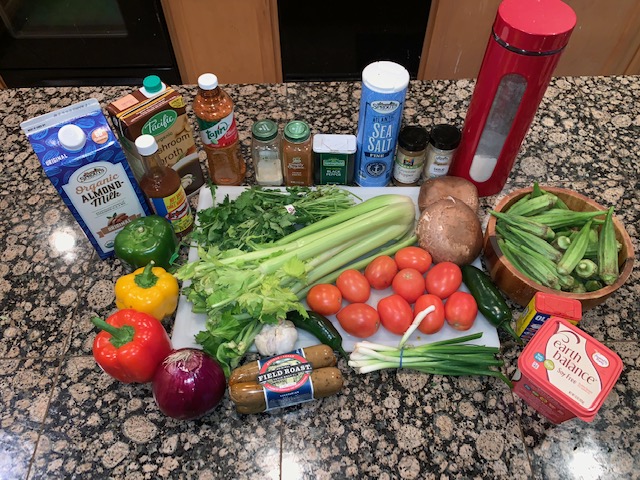 After you’ve gathered alllllllll of your ingredients (and feel free to add or subtract whatever you’d like; you could really add more of your favorite veggies if you wish), it’s time to get everything chopped up. So get to chopping, then begin adding to the pot. First, add your grapeseed oil to your largest pot, after the pot heats up, then add your vegan sausage:

Cook the sausage on medium heat for about 7 minutes or so, then add the carton of mushroom/vegetable broth. Get a large spoon and stir.

Next begin adding the rest of your veggies: (And I had tons of vegetables, so I felt like I was adding vegetables for like 10 minutes! Lawd!): 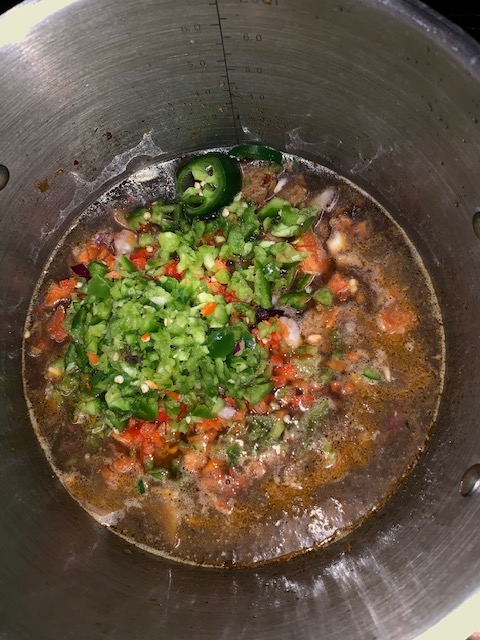 After all your veggies are added to the pot, you can then add your desired seasonings as well, and stir. The veggie/sausage pot will cook on medium heat, covered, and should look something like this:

After you have the pot of veggies going, smelling all nice and yummy, you can get started on your roux.

In a separate pot, add 3 tablespoons of vegan butter, and melt down on medium heat. Then add your 3/4 cup of flour, mixing it in with the melted butter. After, slowly begin adding your almond milk, stirring everything together the entire time. Add the Old Bay Seasoning and a generous amount of sea salt. It will be clumpy, then gooey:

Add more milk if you desire, if you want it to have a smoother texture. (Either way, you’re gonna mix it in with the veggie pot, so it will smooth out some then as the pot continues to simmer and as you continuing stirring.)

After cooking and stirring the roux for about 10 minutes, you then can add the roux to the veggie pot:

Then cover and let simmer on low for at least an hour or so, stirring occasionally throughout the cook time. This way the flavors and spices will really start to set in. Ahhhh.

After about an hour or so of cooking, it should look something like this:

Many people like to eat their gumbo with rice, but we are a family that loves quinoa, so I made quinoa to go with the gumbo:

Get your favorite bowl, put the quinoa in, then add the gumbo on top, and bon appetit!

And ya’ll know me, I like my food spicyyyyy, so of course I added my new favorite Mexican hot sauce:

All I have to say is, this is one of my favorite dishes I’ve made in a long time. It honestly came out so good, and I’m not just saying that because I made it! Hahahaha! The hot sauce was a nice addition, but really, the gumbo had its own little spice to it already! (And of course if you don’t like spicy food, you can omit the jalapeño peppers.) So needless to say this is a dish I will definitely be making over and over again, and it is perfect for this time of year, when it’s all cold and wintery outside, and even better if you want something to cook for the Holidays. I’m low-key obsessed.

Have a great rest of your week Fabbies! Peace and love to you all!