To rewind a bit, the reason I even made an acupuncture appointment was because it was something that I have always wanted to do. I knew that acupuncture was a healing mechanism used to relax you, plus it offered all sorts of health benefits. But I honestly did not know much more than that, and knew that instead of scheduling a spa day where I would get a massage, I wanted to try something different. So I put on my good googling hat, and began researching acupuncturists around the city.

I ended up finding a place located in downtown Phoenix, called Japanese Acupunture. The practice had stellar reviews online, so I called, made an appointment, and showed up on Friday! Before I got to the appointment, I was emailed a list of what to expect, what to wear, and also intake forms. Not gonna lie, I was like “what the hell am I getting myself into?” as I read over the instructions and medical questions. But I still was so curious, and very much wanted do it!

According to www.dictionary.com, here is the definition:

I know that when many people read that their skin is going to pricked with needles, they are probably like, “oh helllllllll naw!” But after doing my research, I found that most studies show that acupuncture is very close to being pain free.

Acupuncture is still a bit of a phenomenon in this country, and according to www.medicine.net

“The general theory of acupuncture is based on the premise that there are patterns of energy flow (Qi) through the body that are essential for health. Disruptions of this flow are believed to be responsible for disease. Acupuncture may, it has been theorized, correct imbalances of flow at identifiable points close to the skin.”

You guys already know that I love anything that contributes to good health, so that is another reason that I wanted to give acupuncture a try. On the day of my appointment, I opted to wear a comfortable t-shirt, some Nike running shorts, and some slides.  When I arrived to the establishment, it was small and cozy, yet the high ceilings and large windows gave it that downtown loft-city-vibe. It was quiet and tranquil, with soft music playing throughout the speakers. There were 2 rooms side by side, separated by curtains for privacy.  My appointment was set for 2:30 pm, and I arrived a bit early. I was also surprisingly calm. I guess the fact that the soothing music playing in the office was a calming force in itself. So during this zen-like state before my acupuncture appointment, I of course I snapped selfies with Snapchat filters like any other grown ass woman would do:

Right when I found just the perfect lighting for my selfies, Frank, the practitioner came out to greet me as he was saying goodbye to the client before me. She smiled at me and said, “Enjoy!”

Welp! If I needed any more confirmation to feel relaxed before my session, I had just gotten it from her.

The room where I had the acupuncture done was small and pleasant, with huge floor to ceiling windows that that were covered by blinds. Definitely not like a massage room where it’s dark, but I was digging the city-loft vibes of the space:

Frank, the practitioner is an older Japanese man with a thick accent. He was very warm and soft-spoken. We started the session by me laying on my back (still fully clothed; this ain’t your typical massage), with a pillow under my legs for elevation. Frank began with checking my entire body for any localized pain. This was done by him applying pressure points with his hands (similar to a masseuse) from the bottom of my feet all the way up until he got to my head.  He then told me he would apply the needles in localized energy portals throughout my body. This included the center of my forehead, my left and right ear, and on either side of my stomach. That’s it.

I asked tons of questions throughout this session, because I was just so curious! I wanted to know why he chose to place the needles on my forehead and ears, and he explained to me that those were the areas of the body where energy began its journey throughout your body. And the needles help regulate the proper flow of energy within the body, through stimulating the body. And the stomach is considered the “2nd head”, which means lots of clarity, intuitions, thoughts, etc. come from our “gut”. So needle placement was there to help regulate the energy as well. So to keep cont, I had just 5 needles that I didn’t even know were in me until I pulled out my phone and flipped the camera on me so that I could see:

After several minutes I eventually felt a small tingling-like sensation on my forehead and ears, but not painful AT ALL! After applying the needles on me, Frank the practitioner told me to relax and he left the room. So I did. I relaxed, and almost fell asleep!  After about 30 minutes or so, (Frank returned and added some enzyme powder to the needles on my stomach, and used a lighter to light them. So the enzyme powder is at the the top of the needle, which now has smoke coming from it: 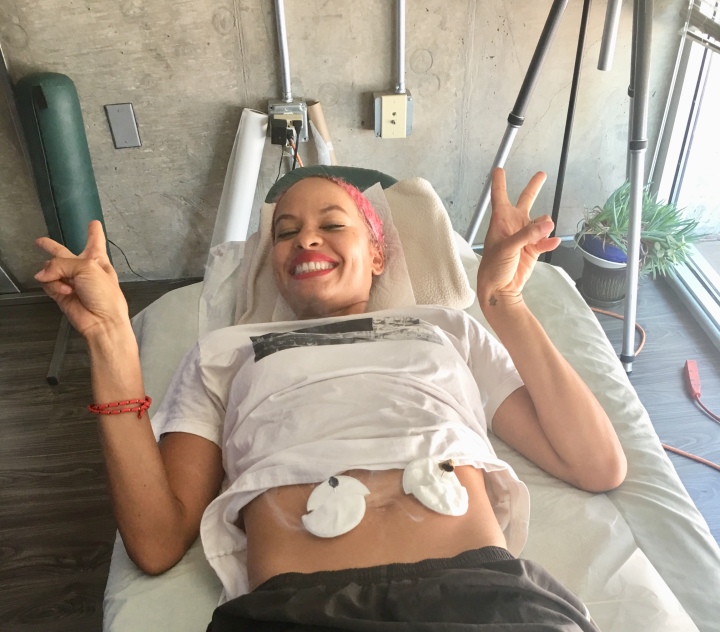 And again, no pain. No…nothing really. I seriously was waiting for some magical moment to happen. And it didn’t. So after relaxing again with the burning enzyme powder on my stomach, I then had to turn over and lay on my stomach, where Frank inserted one single needle in the middle of my upper back. After about 5-10 minutes of that, my acupuncture session was over. Frank came back in and removed the needle from my back. He asked me to sit up, where he than brought me some mineral water.

As I sat up, I told Frank that I was expecting tons of needles all over my body, similar to the pictures I’ve seen online or on television. Frank emphatically shook his head no, and said that using that many needles is highly unnecessary and overstimulates the body. He said that acupuncture is most effective when you can locate the necessary portals, and allow healing to take place in the localized areas. If a client were to come in with pain throughout their bodies, then a needle would be placed in each area as needed, but never like you see on the movies. (*This is Frank’s stance, and read on to see why I respect his word.*)

Frank and I then discussed wellness and holistic healing of the body, (through diet and healthy lifestyle), and other topics related to overall healthy living. I also asked him how often should someone like me do acupuncture, and he said once a month for maintenance, similar to any other wellness maintenance such as the spa, a massage, etc. But of course if any ailments arrive I should schedule an appointment as needed. He then told me that I would probably be a little more sleepy than usual that night, and that it was normal for patients to go to bed earlier than their bedtime the day of getting acupuncture done. I thanked him and told him that I could not wait to see if I would notice any more results, other than feeling super relaxed. Here I was last week after leaving  Japanese Acupuncture:

My monthly cycle was set to come a few days after acupuncture, and when that day came, I felt the “oh-I-know-my-time-of-the-month-is-coming-because-I-feel-those-annoying-twinges/cramps-where-your-body-tells-you-that-it-could-happen-any-moment-now, feeling. But nothing else beyond that. Typically either later that night or the next day, more cramps follow. But this time…nothing. I barely cramped this entire cycle! By the end of the second day, I realized that my cycle was definitely much lighter, and was I not cramping. So now I’m thinking about acupuncture, and it lead me to dig deeper about acupuncture as it relates to menstural cycles: And here is what I found:

“In the case of relieving menstrual discomfort, acupoint stimulation increases blood flow to the uterus, which can relax the muscles similarly to a hot pad and reduce uterine contractions (aka cramps), says Lisa M. Bartoli, D.O., Fellow of the American Academy of Physical Medicine and Rehabilitation at Beth Israel Medical Center’s Continuum Center for Health and Healing. It also increases endorphin release to minimize pain and improve PMS symptoms including irritability and mood swings, she says.”–www.womenshealthmag.com

Wow. I am a fan. And I am going back next month! As I began further reading on the many of the health benefits of acupunture, I found that acupuncture is actually used to cure/treat LOTS of things. According to US San Diego Center For Intergrative Medicine, acupuncture also helps treat:

Who knew?! Acupuncture definitely gets a confused,”why the hell would I do something like that?!” rap. In other words, I think many people (including me before I went) have lots of misconceptions about acupuncture. It does not hurt guys! The fact that the acupuncture is about the realigning of energies is right up my alley, as I am a huge advocate for protecting my own energy, and staying balanced as much as I can. Remaining balanced emotionally is the key to good mental health as well. Acupuncture and the phenomenon that it is, helps with all of that plus so much more. I would definitely recommend it to anyone, just so you can see what positive effect, if any, it would have on you. And I would especially recommend giving it a try if you are in some sort of pain, or are dealing with emotional issues such as anxiety and depression. I have been in such a state of contentment and relaxation all week long, and I promise it is not the weed I’m smoking! Ha! The fact that I had virtually no cramps this month is reason enough for me to go back again in July, and declare that for me, acupuncture is here to stay!

Have a great weekend Fabbies! I have so much more to update you guys on! We’ll chat more next week!

2 thoughts on “I Did Acupuncture For The 1st Time!”

My name is Raven, and I am creative genius. No really, just you wait. ;p I started this blog in May 2014 as an outlet to share pieces of my life, things I have learned from motherhood and life, and my expertise in all things fashion! I want to taste, feel and explore everything, and this blog is a creative outlet for me to do just that. View all posts by *Raven*