Hey Fabbies! Back in early December, I took a trip down to Miami, Florida for a long weekend to be a part of my friend Billy Joe Michel’s art exhibit that took place on two consecutive days. I was there for a total of five days, leaving that Thursday, and returning to Phoenix on Monday. For that weekend, I hired a film crew from www.villaschannel.com to film the entire weekend, because I just KNEW that the weekend would be epic, and would make a great episode for my  YouTube Vlogs. I waited to publish this post because I wanted to post it during the same time that the Episode on Youtube was posted!  That way you will have access to everything we did in Miami for Art Basel 2017. And Ya’ll! The episode is BEYOND epic. You can see for yourself HERE While the episode is A MUST-SEE MOVIE, I wanted to share more photos of the art that I got a chance to see, share what I ate while in Miami, and other photos for the trip as well. So click through and ENJOY!

If you guys remember, I interviewed a friend of mine, Billy Joe Michel a few months back, talking about her career in the art industry, and how she was preparing for the huge event that is Art Basel in Miami. (You can check out that interview HERE). Billy Joe had been working toward Art Basel for a very long time, and had asked me over a year ago to apart of her exhibit. She briefly told me her idea, and I was like “hell yeah! I’m so there!” So fast forward to December 2017, and me, along with 10 other girls, plus a few photographers, her dope DJ, my Miami-based  videographer, a makeup artist, and friends of friends, all helped bring Billy Joe’s creative vision to life. The weekend in Miami, was nothing short of amazing, and I am so glad that I got a chance to be a part of it, and that it was all captured on film!

What I Wore For The Airplane Rides:

For this trip, y’all already know I wore a onesie. Well, the technical term is a unitard, but whatevs. It was an olive color unitard, paired with some cool socks that I stole from hubby (that I actually think I bought for him years ago as a stocking stuffer), and my Nike sneaker boot wedges. It was cold in Phoenix, as I had a red-eye flight, so I wore my long (faux) suede coat over it:

The morning I landed in Miami, it was nice and breezy, so I had my long open cardigan with me to keep tied around my waist. I put it on when it turned a bit cooler at night. 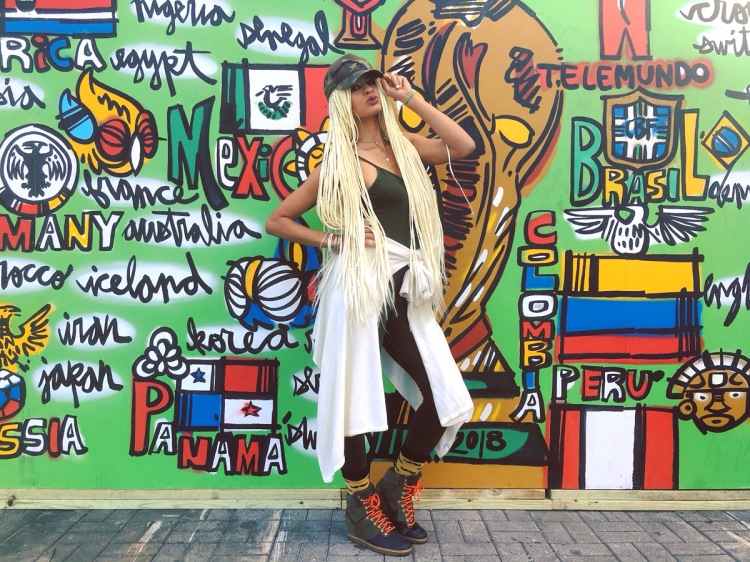 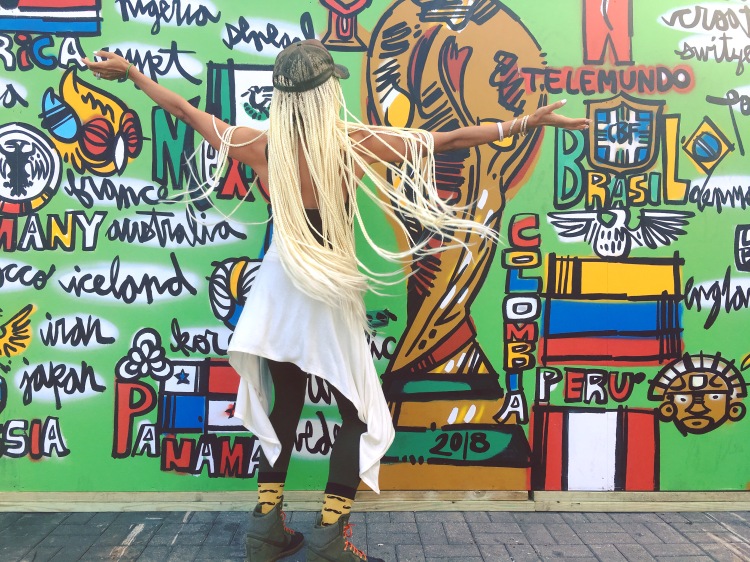 Traveling Back To Phoenix:

For my return trip back, I wore a black fitted zip-up onesie with white trim, my favorite camouflage hat, and coat that I put on top. Ya’ll.  I am always freezing on the plane. 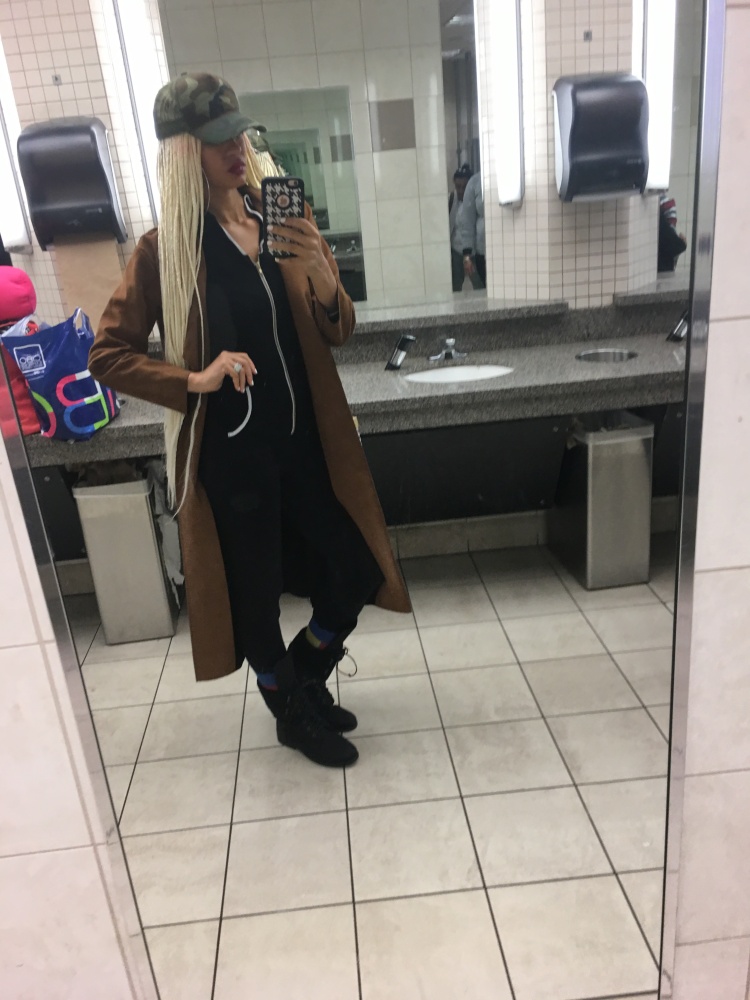 What I ate in Miami

I didn’t get a chance to photograph everything I ate over the course of the five days, but I did manage to snap a few pics of some of the yummy food I enjoyed while I was there:

When I first got to Miami, I met with my videographer, Jose, at an Organic cafe called, Dr. Smood. They had a great menu, including lots of smoothies and vegan options! I had one of the best tasting sandwiches I had had in a long time. It had avocado, homemade hummus, spinach, tomatoes, and pesto on toasted spelt bread. SO GOOD! 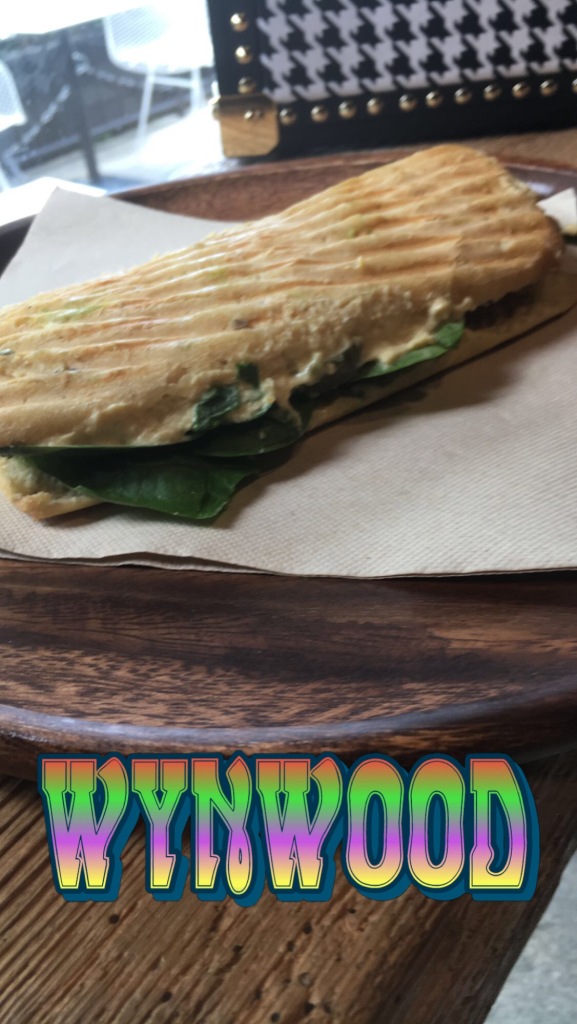 And I also got a smoothie to-go which I drank before I was even out of the restaurant good! It was made of almond milk, orange, pineapple, banana, coconut meat, dates and chia seeds. It was so good that I had the uber stop by there on the way to the airport when I was headed back to Phoenix!

After getting to the Airbnb that Thursday evening, I met all of the girls, and eventually ordered a ton of groceries and liquor and wine for the house, and I offered to make a huge pot of my famous vegan rotel cheese dip. Everyone was eager to try this dish that I promised them they would love. And they did! I only managed to get one picture of the vegan ground “beef” right when I first started cooking.

But just know that it did not disappoint! 😉

Other things I ordered from Whole Foods were my favorite snacks, including carrot sriracha hummus, spicy yellow lentil hummus, Kettle Brand Chile Lime chips, Blue Corn Tortilla Chips for the rotel, white whole organic mushrooms to snack on with the sriracha hummus, kale, spelt wraps to make wraps with and also for dipping in the hummus, avocados, oranges, cilantro, vegan mayo (for my avocado wraps that I made) and honeydew. And sadly, the honeydew is the only thing I got a picture of.

…But I did manage to get a picture of our “chips” corner, so you can see some of my chips in the pic below. Ha! 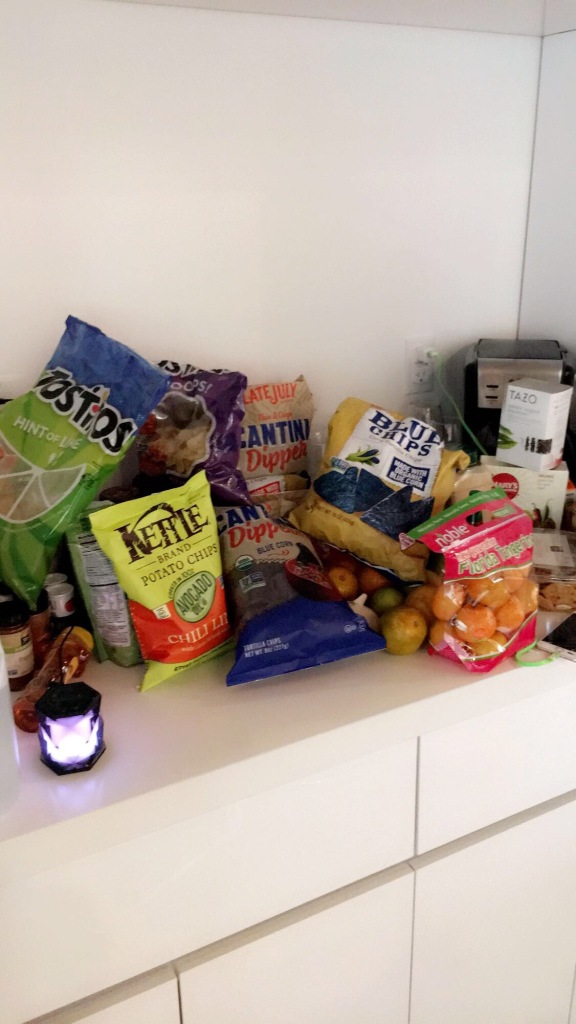 For lunch one day, I had some BOMB smoothies, along with a quinoa salad with grilled mushrooms and some sauce from Guarapo Organic Juice Bar & Cafe

The days were long, and the nights seemed longer each day I was in Miami,  and after returning from partying each night, I ordered vegan pizza every single night! I used Uber Eats to order the pizza, and luckily for Miami, many places delivered well after midnight. And being the only vegan in the house, I had the whole pizza to myself each time! But I did share with whoever wanted to try! The pizza I ordered twice was from a place called Mamma Caruso’s. They didn’t have a vegan option, so I ordered the BBQ chicken pizza with no cheese and no chicken:

The other place I ordered pizza from was a place called Paul Gee’s, which actually had three different kinds of vegan pizza! I got the Ricotta de Vegan, which had vegan tomato sauce, house made vegan fennel sausage, post oven – house made cashew ricotta dollops, baby arugula and extra virgin olive oil. DIVINE!

While I didn’t take pictures of everything I ate while in Miami, I did manage to snap a few photos of my airplane snacks that I packed in my carry-on bag. I always bring snacks when I travel, because there isn’t a guarantee that the airports will have vegan-friendly options all the time. I had my favorite vegan jalapeño havarti-style cheese and jalapeño crackers. Ridiculously spicy and so good! 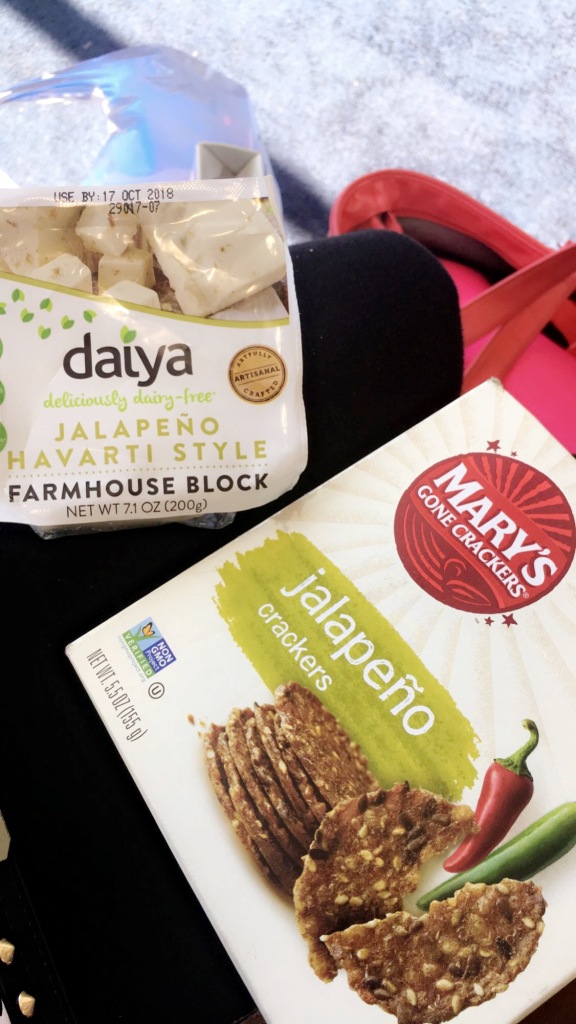 The first day in Miami, after finishing up the meeting with my videographer and enjoying lunch, Jose and I then walked around the Wynwood Art District for a bit, where several, and I mean like hundreds, of art galleries, sculptures, pop-up galleries, live bands, and more was literally on every corner and crevice of where we were. I have never been anywhere and art was just smack dab in your face everywhere you looked.  So of course I had to take pictures. A lot of them. Everywhere. ;p 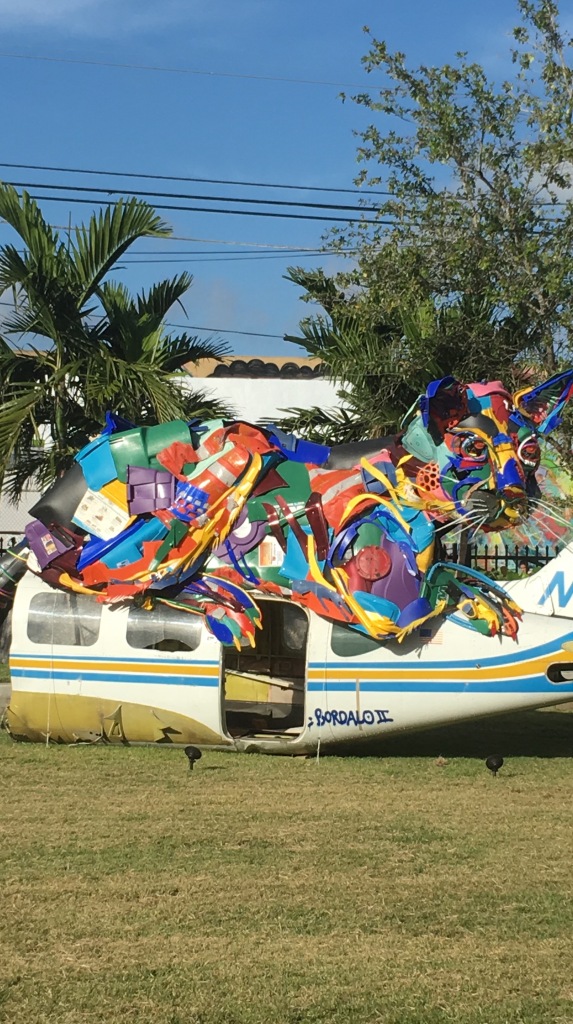 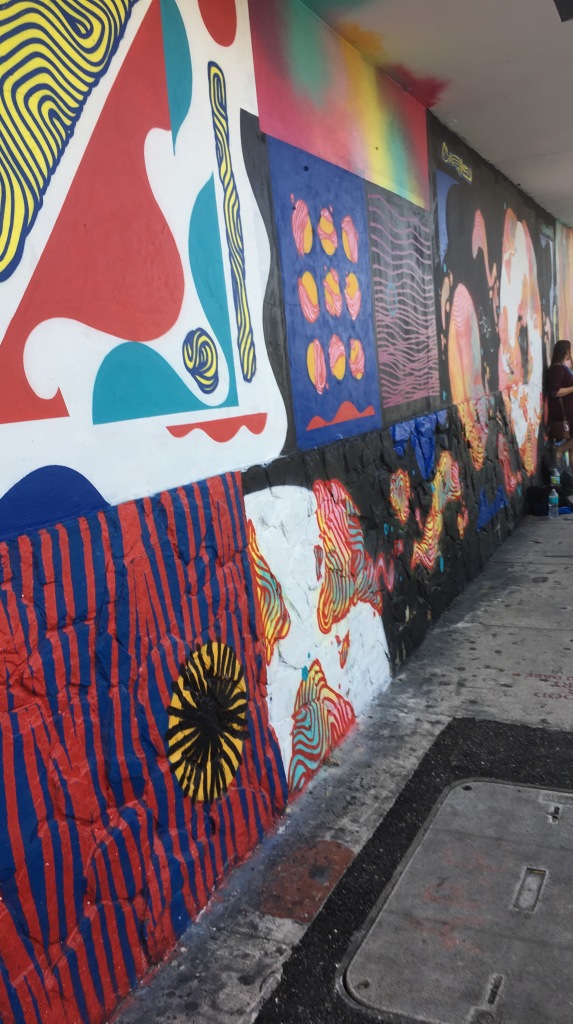 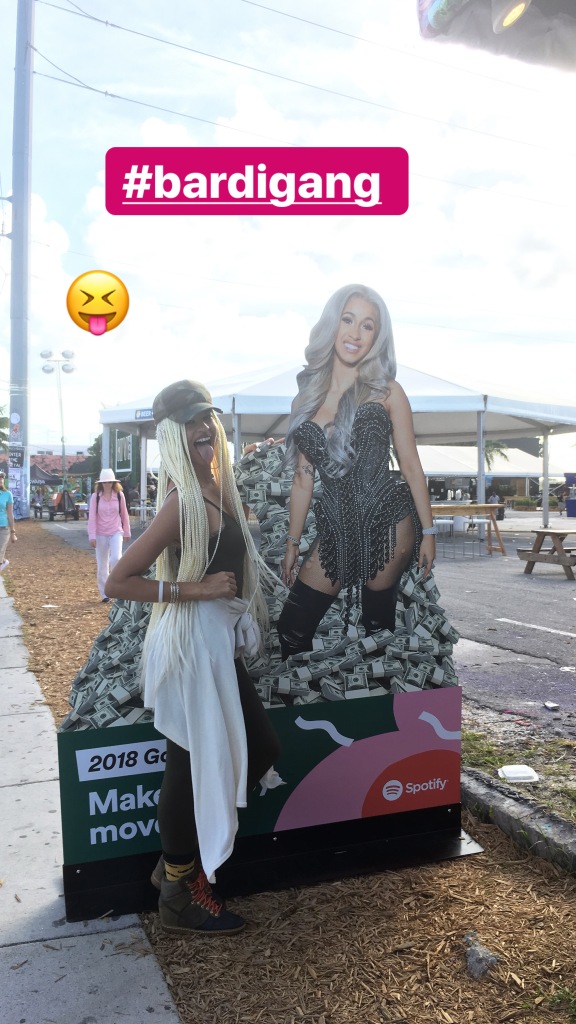 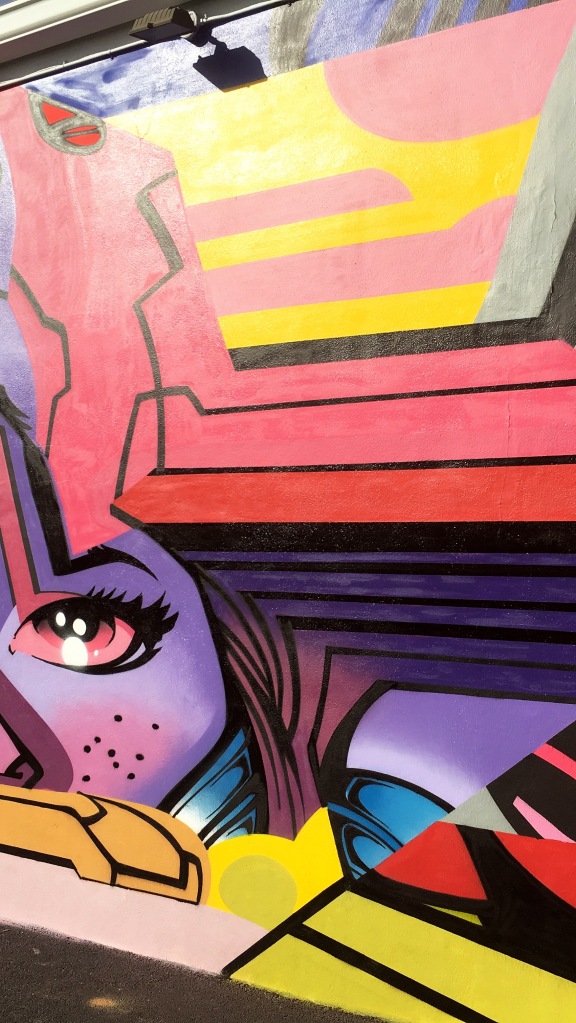 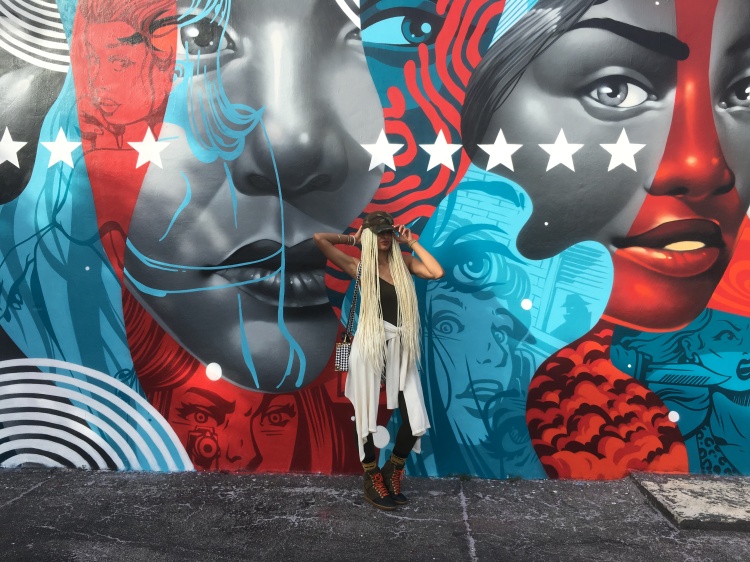 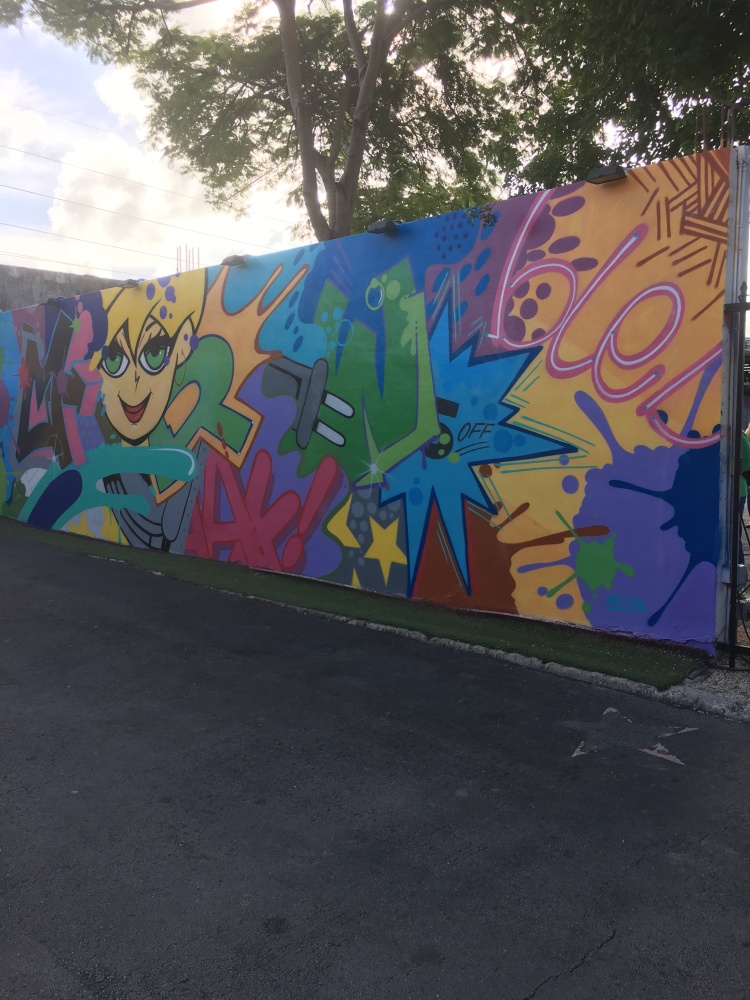 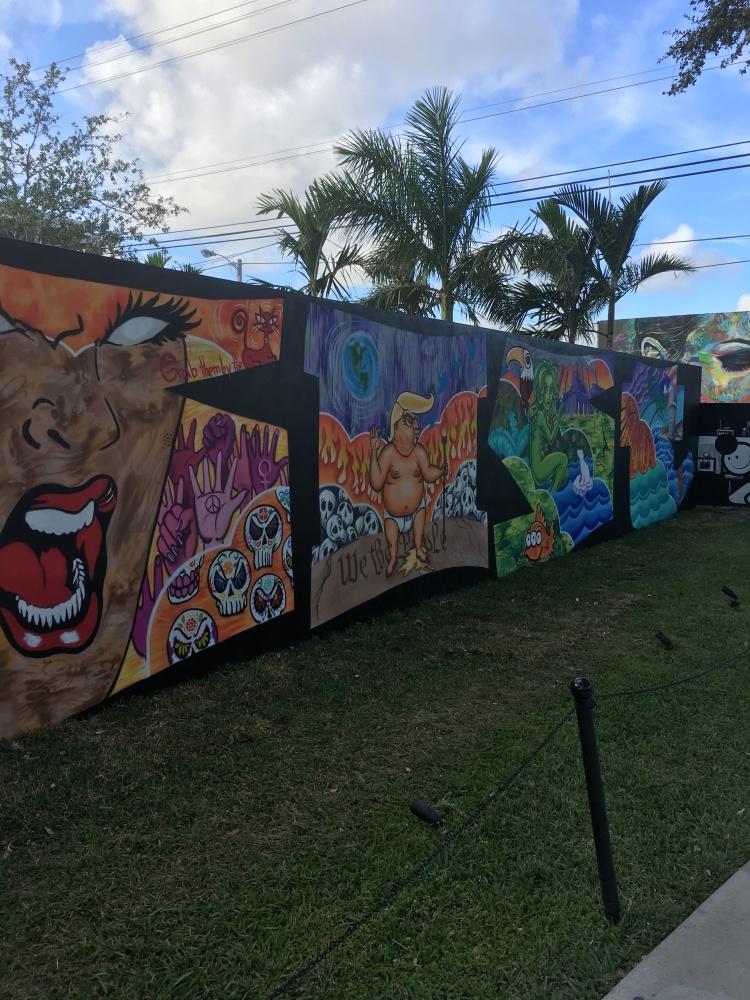 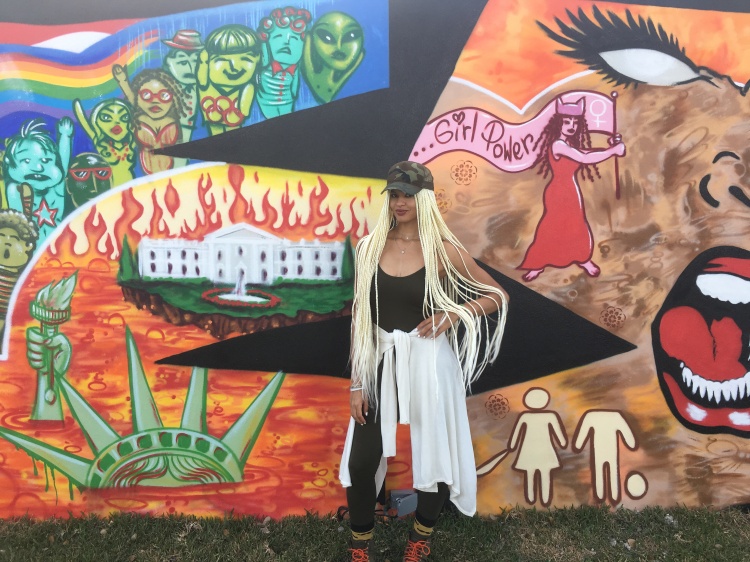 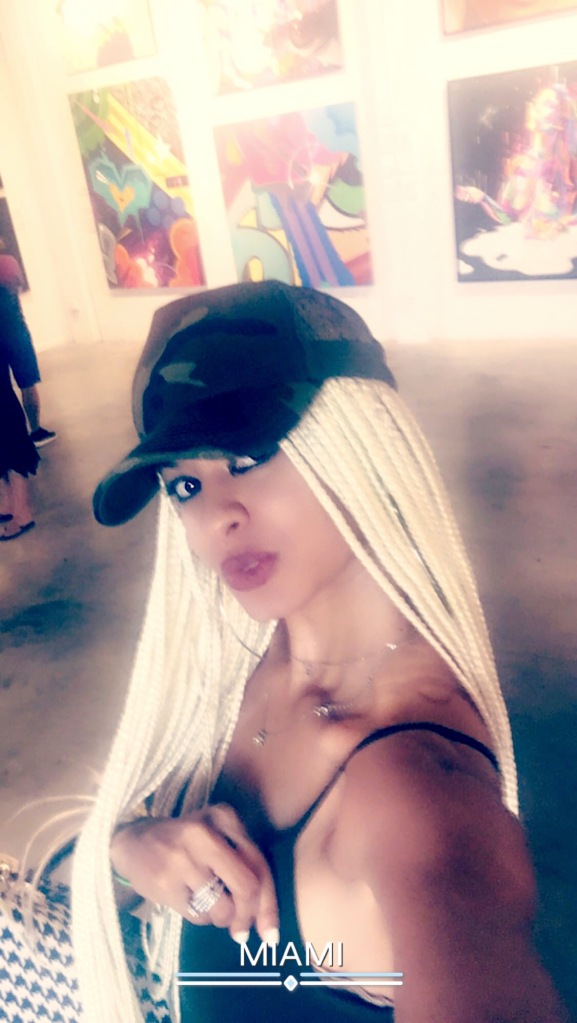 Wynwood Art District had beautiful artwork and sculptures from artists around the globe, and I so enjoyed taking in the art. But what was even more special, was getting a chance to be a part of my friend Billy Joe’s art exhibition, where me and 9 other girls each held one of her works, and marched through the streets of Miami with it. Her works of art depicted her own personal life story.  She broke down the parts of her life into 10 different works of art, which she named, “The TrailHer Trash Commandments”. (And for the Art March during Art Basel, I held Commandment #1):

To read more in depth the story behind these pages, visit Billy Joe’s Instagram page @miss_billyjoe.

She posts the meanings behind these on her page in early January.

For Billy Joe’s Art Exhibit, she wanted all of us women to wear red. We wore long sleeve shirts and red leggings, and looked very uniform. She told us to bring all red just in case we needed back up plans, so I brought my red unitard. Although I didn’t march in the unitard, I still managed to take some selfies in it. Duh! haha 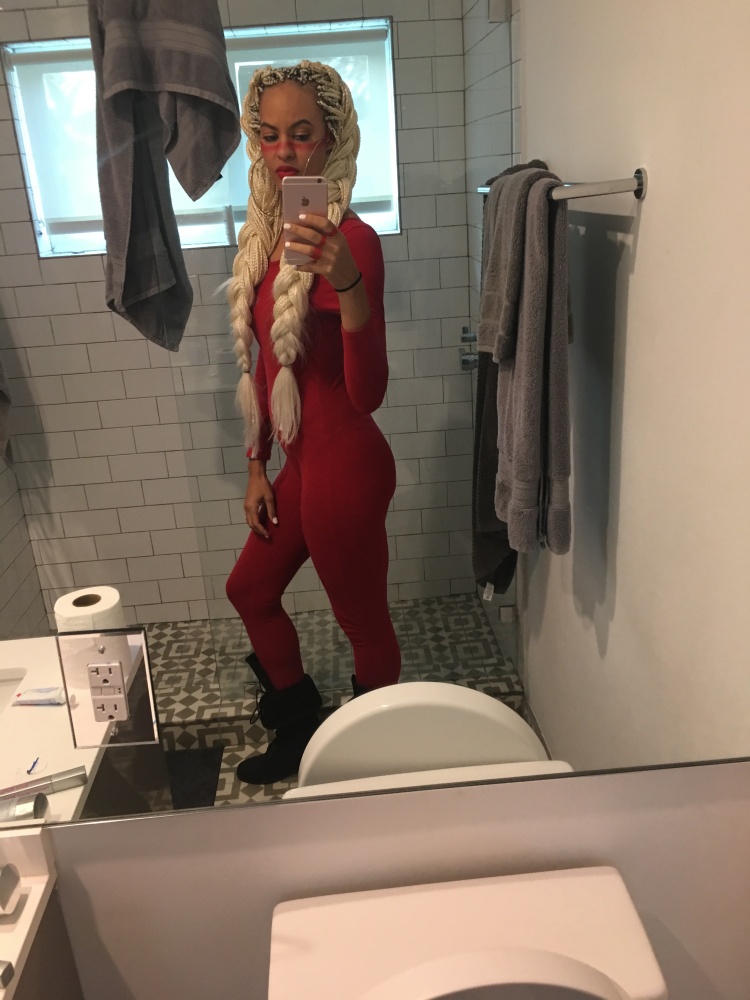 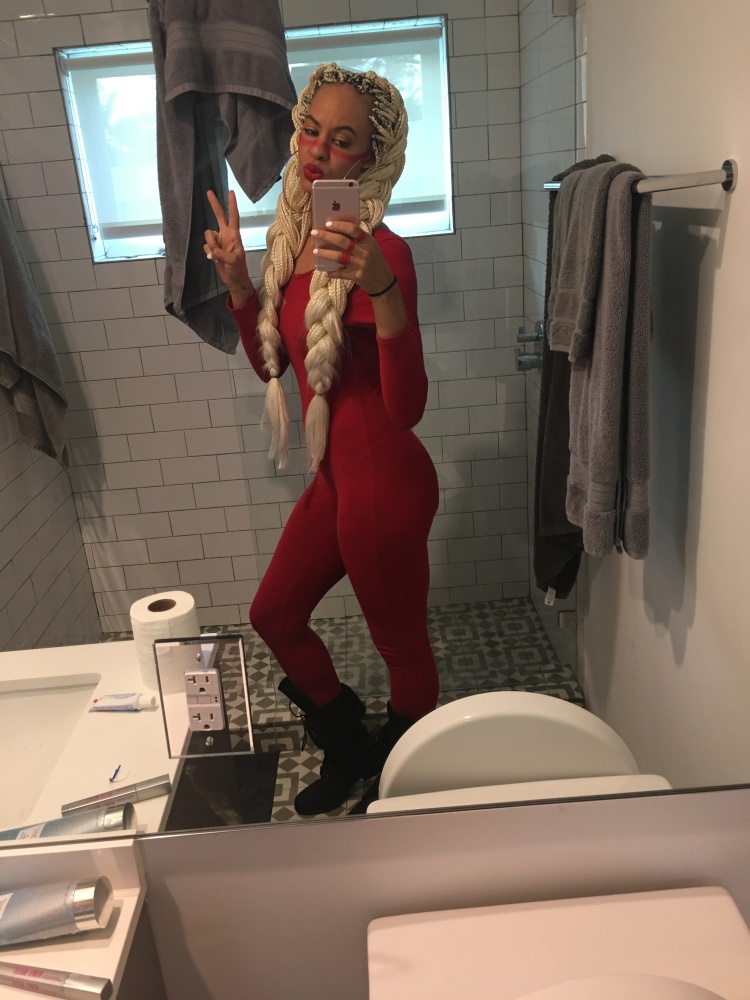 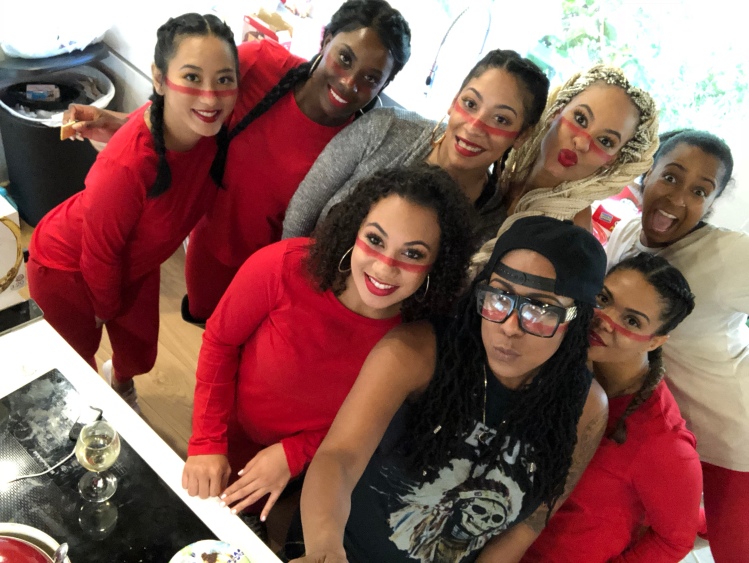 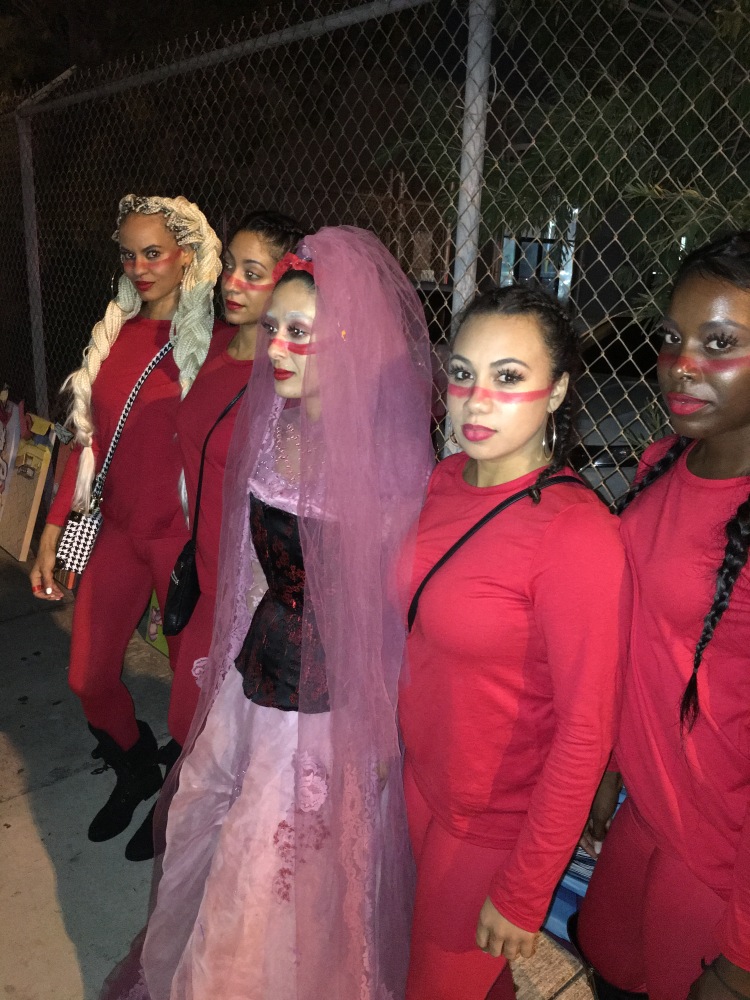 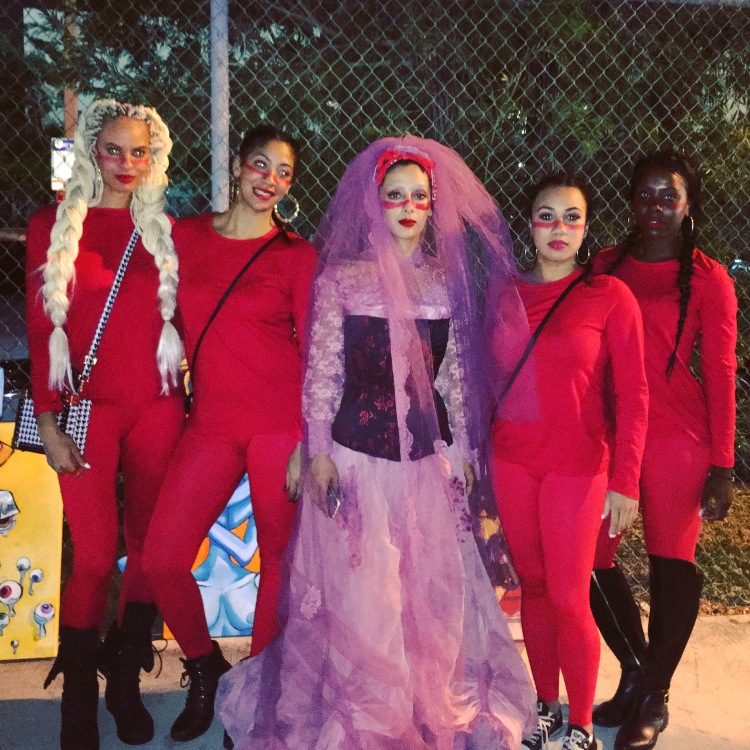 Photos from the Art Marches

We marched with the TrailHer Trash Commandments on both Friday and Saturday night during Art Basel. Anddddd it just so happened that Saturday night was the coldest night of the year in Miami. Whew! Talk about adding drama to the event! But the chill factor, coupled with flashing camera lights, noisy streets, and confused onlookers, made for an incredible experience. People were literally in awe of her work, and the presentation of it all: 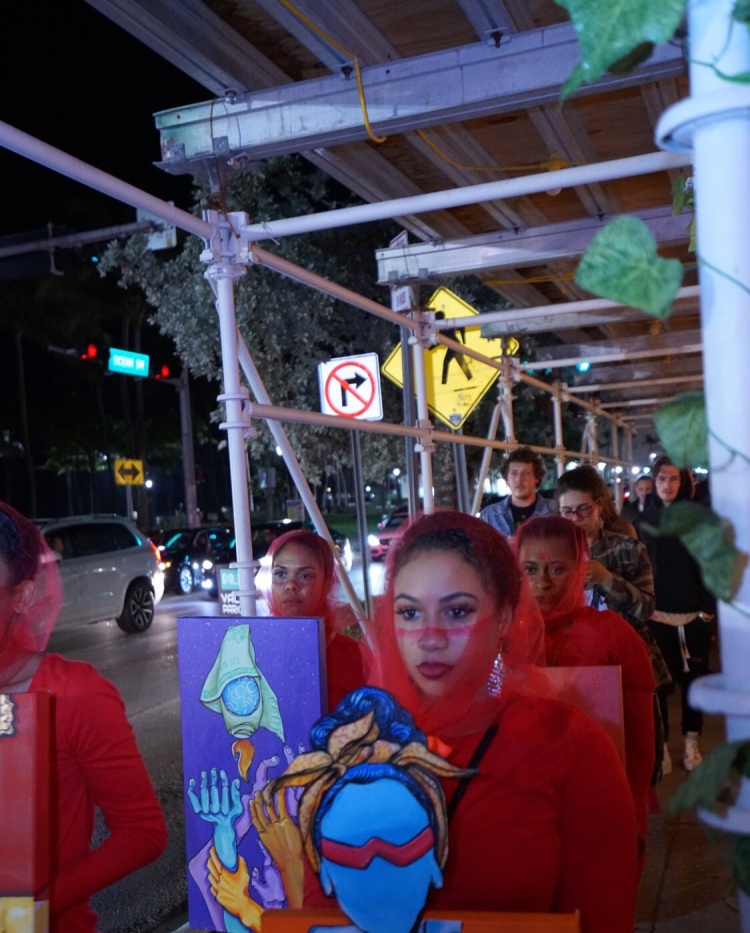 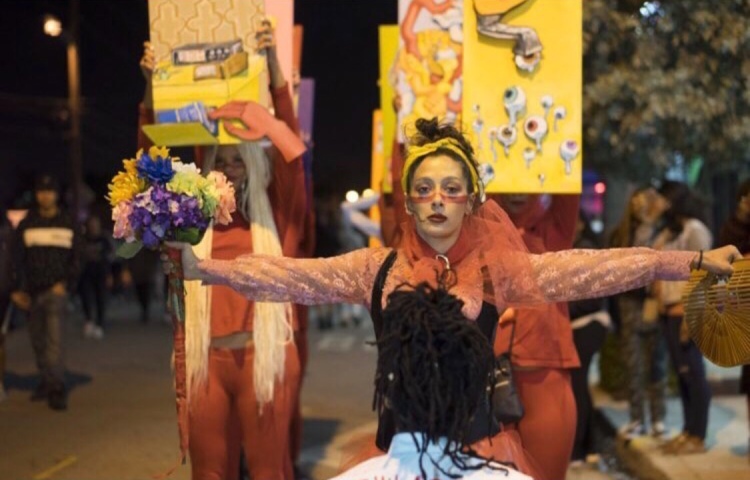 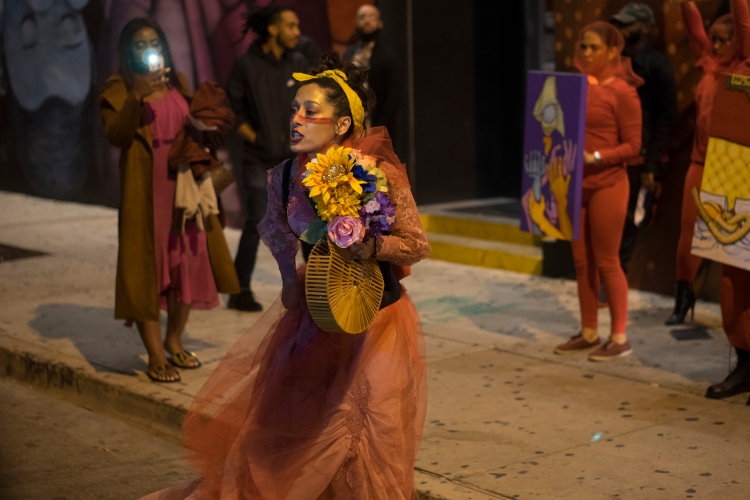 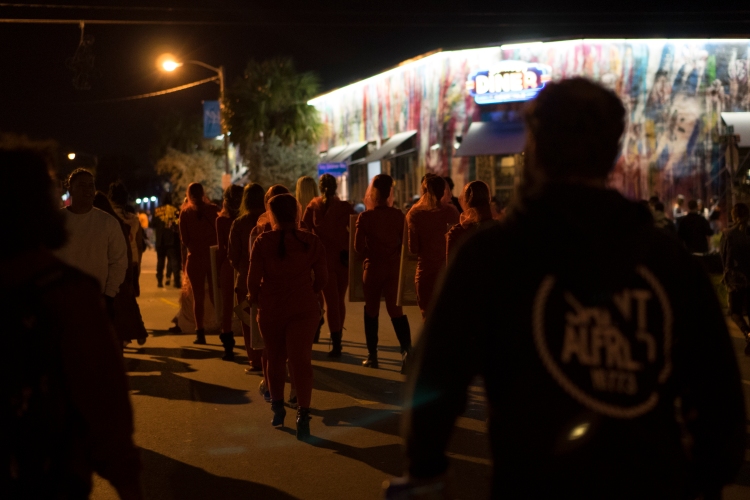 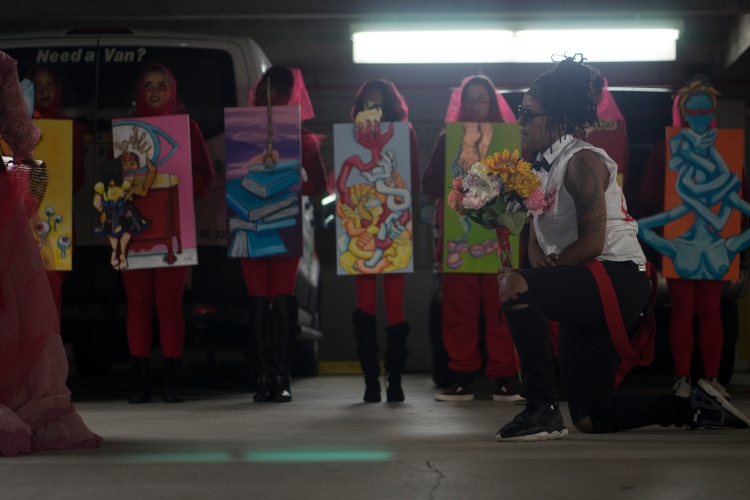 Outfits of the day: Miami Edition 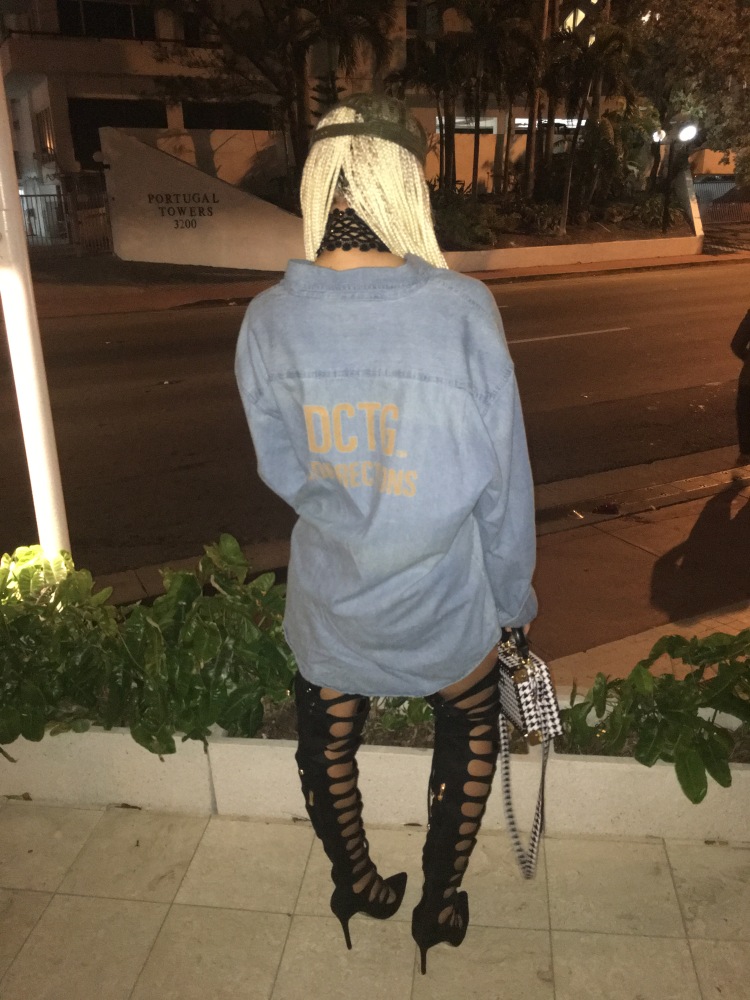 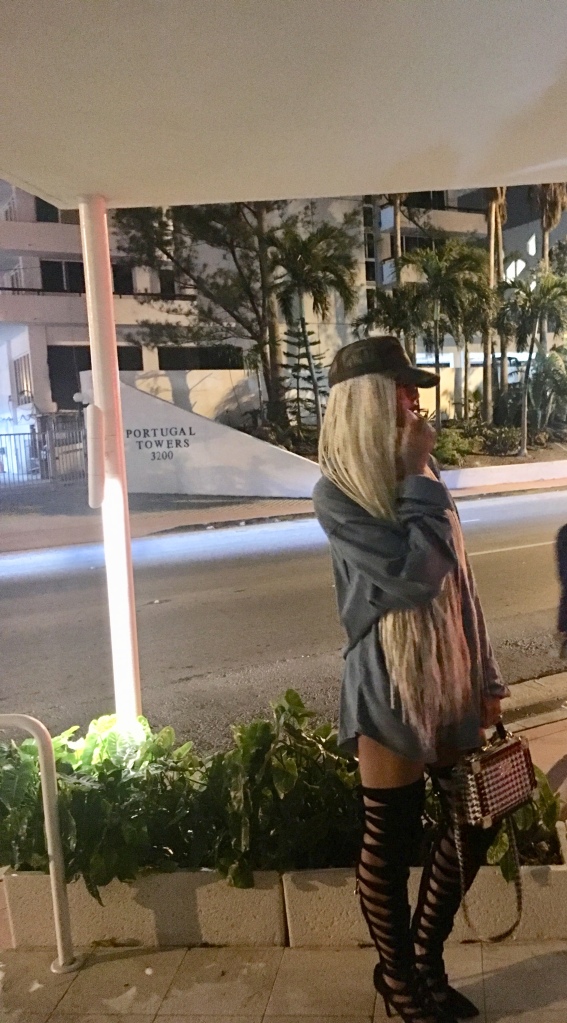 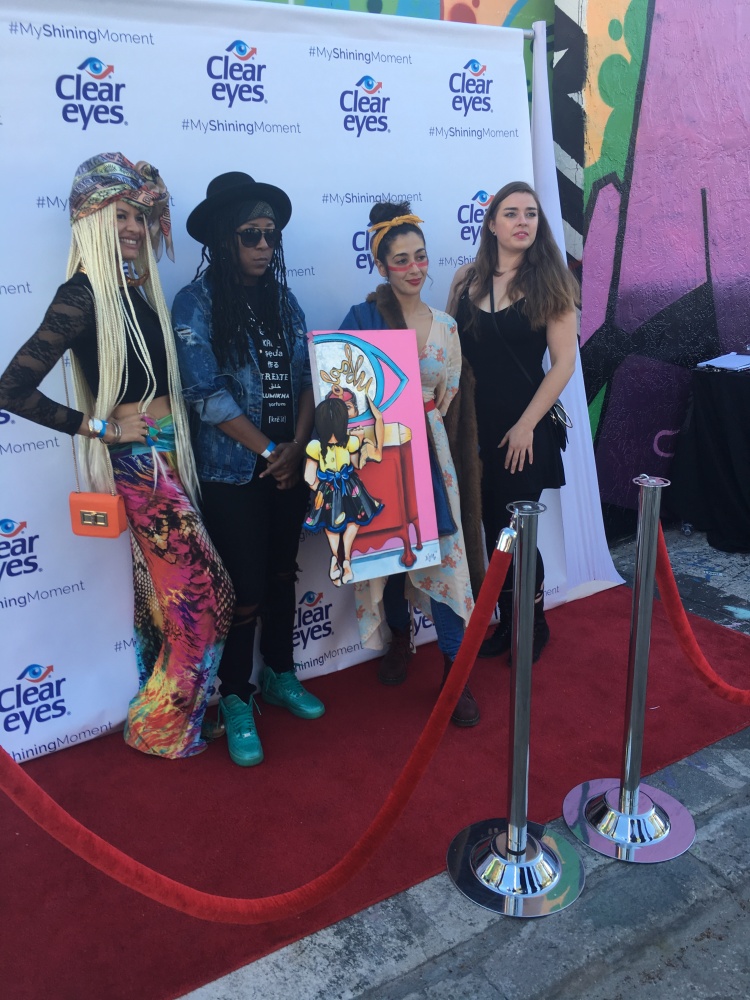 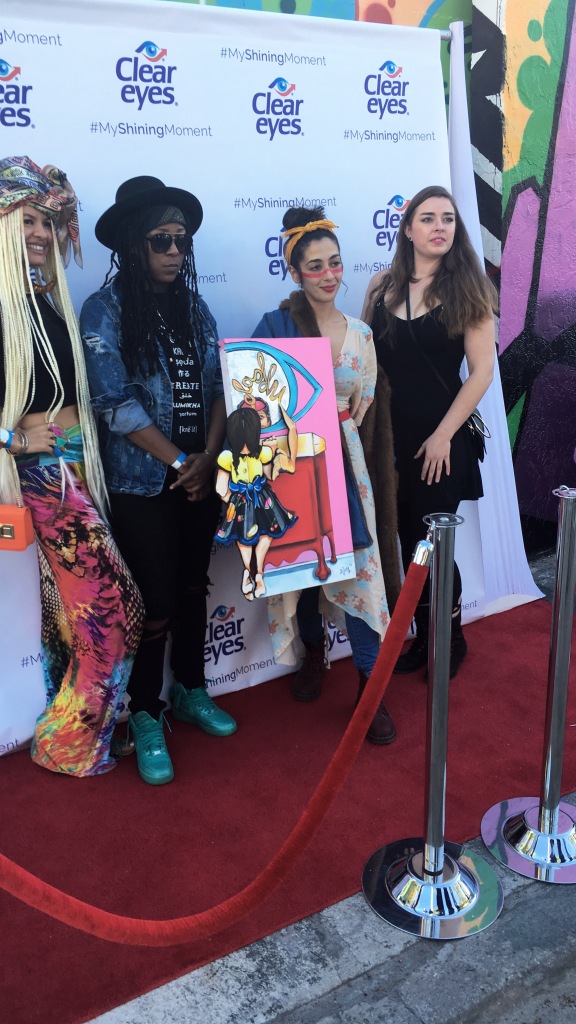 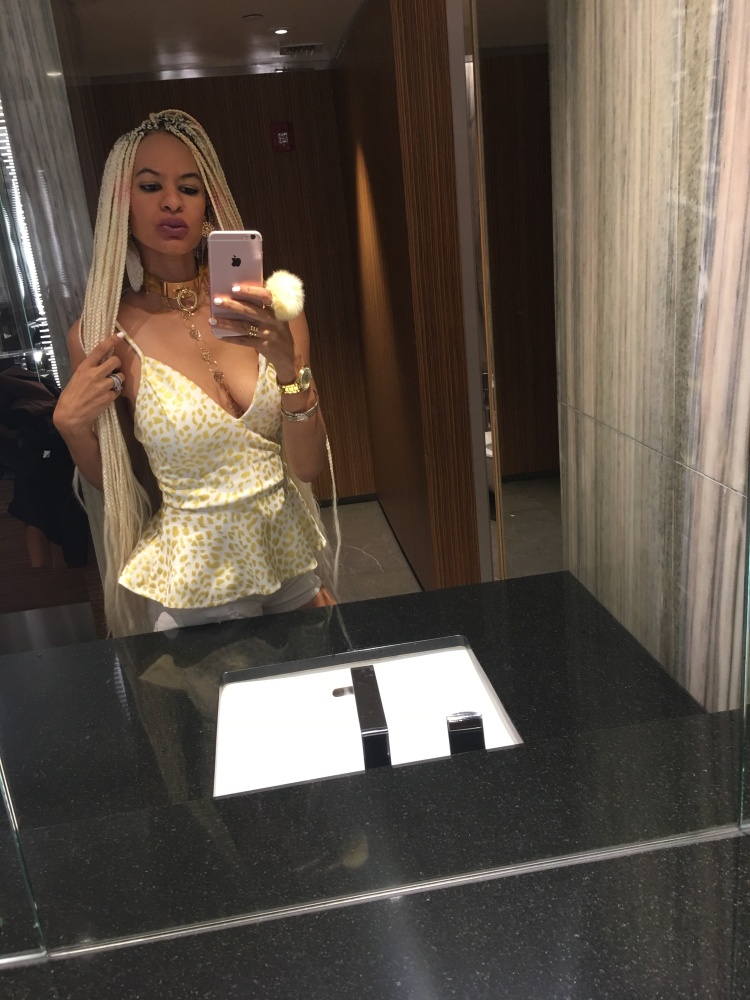 Miami was truly an amazing experience. It was incredible to see such love and support for Billy Joe as she brought her vision to life. Her friends from all across the nation came in to help her make a groundbreaking impact on Art Basel, and I am certain that the city has never seen an art show like hers.

2 thoughts on “My Trip To Miami For My Friend’s Art Basel Show!”