Happy Monday Fabbies! As Valentine’s Day nears, I began thinking about how lots of proposals happen on that day, and how meeting the significant other’s parents happens somewhere along the way. I know that meeting someone’s parents is often a big deal, and how you present yourself to them can be stressful for some. So for this “What To Wear“ Series, I decided to put together outfit ideas on what you could wear when you are planning to meet your boo thang’s parents. And of course the meeting places may vary. I mean, you could be meeting them for dinner inside their home, at a restaurant, at a family outing, or anywhere. But location aside, the key is to put some effort into your overall look, so when that meeting does take place, you’ve already impressed everyone before you even speak.

Before we get into the outfits, I want to go down memory lane for a bit. (Ya’ll know I love a good storytime during my blog posts. Ha!) Anyway, I remember quite vividly the year that I met my in-laws (Supreme’s parents). It was the year 2008. Supreme and I had been dating for about a year and a half at that point. Supreme was a Rookie in the NBA playing for the New Jersey Nets. For  his first home game of the season, his entire crew (friends and family) flew to New Jersey to watch his debut basketball game. He and I were dating long-distance at the time, as I was still living in Memphis. So me along with, his mom (who is my Mother-in-Law now), his two best friends, his dad (my now Father-in-law) and his dad’s wife, and their daughter all flew in to New Jersey for a weekend to watch Supreme play.  So needless to say, I was meeting ALOT of people at once, and it would be at Supreme’s game at a basketball arena. So because I knew I was getting the chance to finally meet everyone face-to-face, I made sure that I dressed…well… according to my style! And if I could even try to sum up my style, it would probably be bold-colorful-glammed-up-hippie-sometime tomboy-luxe-but-comfy-feminine-fun, style. Which basically means my style is a little bit of everything, depending on what my mood is. So when picking out an outfit to wear to meet Supreme’s parents at the basketball game, I knew I wanted to be comfortable, feminine, and chic! Sadly I don’t have any pictures of what I wore, but I do remember exactly what I had on, so I put together a similar outfit below to give you an idea: 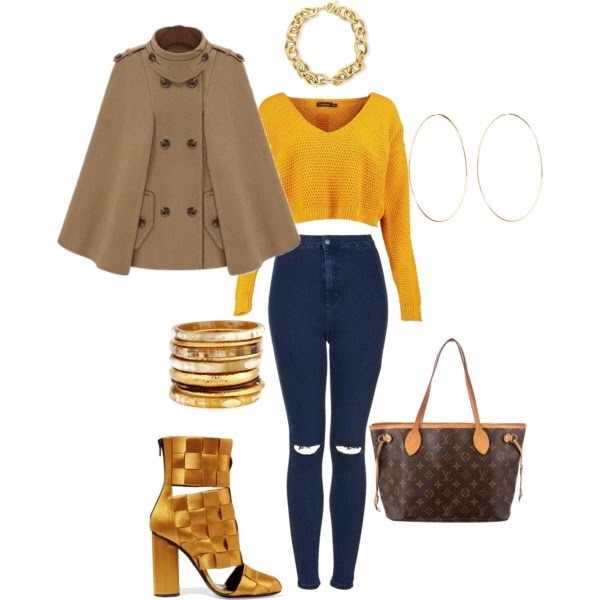 I wore my favorite skinny jeans at that time that I had gotten from Express, with a mustard colored sweater, mustard ankle booties, (I love the ones in this picture! Mine didn’t have cut-outs though), my signature gold hoop earrings, gold chain necklace, some gold bangles, and a tan cape jacket to go over the outfit. It was VERY cold in New Jersey during that time, which was the beginning of November. I topped the outfit off with a Louis Vuitton handbag similar to the one in the pic. After the game was over, we all went out to eat for a late dinner and drinks, so this outfit was perfect for both occasions.

*Also, another little fun fact, is that the night that I met everyone, was also the night that Barack Obama won the vote to become the President of the United States.*

If had to guess, I think my Mother-in-Law, Judy, liked my outfit. Ha! She is ever so stylish, but aside from that she is also just a super dope person and I’m so lucky to have her as my mother-in-law! (And she reads this blog so heyyyyyyy MIL! hahaha).

Now, again, when meeting your significant other’s parents, you want to stay as true to your own personal style as possible. Many of these outfit ideas were put together with the thought that you are meeting your sweetie’s parents for lunch or dinner. And this can be at someone’s home or at a restaurant cafe. Either way, you’re bringing your A-Game so it doesn’t matter what the setting is! 😉 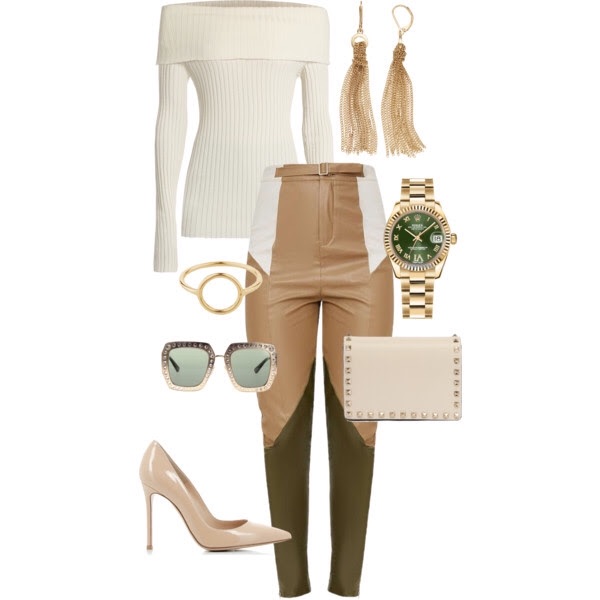 When you want to be a bit more sporty and comfortable, but still keep the fierce factor going:

Above all, when pondering what you want to wear to meet your significant other’s parents, just remember that you want to be comfortable. The more comfortable you feel in your clothes, the more relaxed you will be. The more relaxed you are, the easier it will be for you to feel at ease and will be able to be yourself around new faces. And this is true in any new meeting scenario. You don’t want to be pulling or tugging at your clothes because they’re uncomfortable or the fit is off. Wear what feels good, and you will look great. The parents are going to (hopefully!) love you no matter what you’re wearing, but your fabulous outfit just provides the exclamation mark you need to make a lasting impression.

Which look was your favorite?

Have a wonderful week Fabbies!

4 thoughts on “What To Wear To Meet Your Significant Other’s Parents!”

My name is Raven Douglas-Roberts, and I am creative genius. No really, just you wait. ;p I started this blog in May 2014 as an outlet to share pieces of my life, things I have learned from motherhood and life, and my expertise in all things fashion! I want to taste, feel and explore everything, and this blog is a creative outlet for me to do just that. I also am a designer, happily married to Chris, and have 2 amazing (isn't that what all moms call their kids? "Amazing"?) kids Zé (5) and Vito (4). I hope you enjoy reading my blog as much as I love sharing! xoxo -Raven View all posts by *Raven*