I was talking to one of my good friends, Suzy last night, and we were talking about how hard it is to take the pacifier away from your baby/toddler.
For me, it was not fun!
Zé never immediately took the pacifier after she was born. I tried giving it to her when she was about 3 months old, and she was mildly interested. Then at around 7 months old, she began to teethe, and started to chew on everything, so I bought her a pacifier so she could chew on that, and it was all she wrote! She was hooked! For most babies, pacifiers are soothing mechanisms that provide comfort to them, and well, they don’t want to let the comfort go. Some babies over time simply lose interest, but for others, they just. have. to. have. it.

For Zé, she wanted her pacifier whenever she was upset or sleepy. Also, when she whenever rode in the car or her stroller we would give it to her: 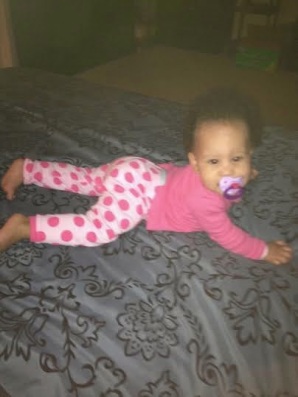 If we were out and about, and Zé would become fussy, you better believe I’d put that pacifier in her mouth so fast! Can you say instant silencer??!

So I totally understand that for a lot of parents, a pacifier becomes a comfort mechanism for the parents as well, because you know that it soothes your baby, thus creating a quiet and calm environment for everyone. For me, though, I knew that I wanted Zé to learn how to self-soothe eventually, so I had planned for her to get rid of her pacifier by the time she turned two.
And let me say this: It was NOT easy. At first I cut the tip of one of her pacifiers off so she’d have no interest in it. Well, she picked up the cut pacifier at bedtime and then threw it, and began crying for it.   Well of course I had other pacifiers so I just went and got her another one. At that point I knew that the only way to get her off of the pacifier for good, I would have to get rid of all of the pacifiers in the house. There would be no going back after. So that’s exactly what I did. As Zé prepared for bed (at about 23 months old), she climbed in bed and was looking for her paci. I told her that pacis were for
babies, and that she was a big girl now. I kissed her and tucked her in the bed. She was pissed! She
cried. And cried. And cried for what felt like ever. In actuality, it was more like 15 minutes off and on before she finally fell asleep. She did this for the next 2 nights as well, only she cried for a few minutes both times. That fourth night, she was over the pacifier, and went right to bed with not so much as a whimper.

For Vito, he took the pacifier for about 3 days right after he was born. But when he was about a week old he began spitting it out immediately when we gave it to him. So I didn’t have to go through the whole ordeal of taking his away lol. Here he is, on the rare occasion when he had one in, and also the day we brought him home from the hospital: 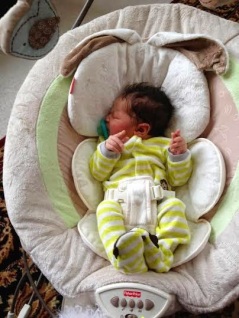 With any big change for babies/toddlers they say (there goes “they” again. Well in the case, “they” are supposedly the experts), it takes about a week for them to fully adjust. I have found this to be mostly true with both of my babies. Embracing change can be hard for both the kids AND the parents. It may be hard at first, but the babies and the parents all get through it unharmed! 🙂

3 thoughts on “Taking the Pacifier Away”